Some people love durian for its unique layers of flavor and creamy texture, which they say beats anything man-made. Each durian fruit is also unique in its scent and flavor so there’s a surprise and great anticipation for the next piece that you put into your mouth.

People say that in China, there are only two things they queue up for — one was when the iPhone X was released and the other, is durian from Malaysia. Demand for durian, that famously delicious or stinky fruit — depending on who you ask — is experiencing a major boom in China. In April, Chinese consumers snapped up 80,000 durians in just 60 seconds on online shopping site Alibaba as part of a deal between the retailer and Thailand, the largest producer of durians in the world. A durian fair in southern China last year drew more than 150,000 Chinese buyers willing to spend big on the fruit — and it doesn’t stop there: there is also durian-flavored ice cream, coffee, and lollies as well as frozen durian and durian Halloween masks. Big western chains in Asia have taken note, too, with McDonalds making durian McFlurrys and hotcakes, and Pizza Huts serving durian pizza.

Durian imports to China have been rising on average at 35 per cent a year according to trade data from the United Nations, and were worth $1.1 billion last year, up from just $243 million a decade ago. Currently, only Thailand can import fresh durians directly into China — due to trade arrangements and processing issues around non-fresh durians — but many Chinese consumers are after different varieties of the fruit such as the highly pungent Musang King, which is grown in Malaysia and is banned on many public transport systems in South-East Asia.

Durians are best eaten fresh. To attract more Chinese tourists, the best way is to bring them here to enjoy the freshest durians. But unlike China, Hong Kong has no restrictions on importing fresh Malaysian durians, and has seen frenzied buying from Chinese mainland durian tourists in recent years. 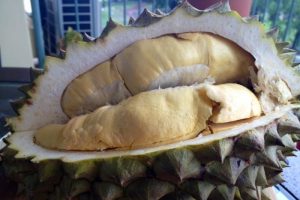 People paid on average up to $US60 for a single fruit and sometimes more if it had been a poor growing season, with some reporting prices in the hundreds of dollars for a single durian of a prized variety. All of the fresh Malaysian durian comes via Hong Kong — logistics, costs, and high real estate prices contribute to higher prices here.

More recently, durian buying and eating tours have become increasingly popular with Chinese tourists who fly to Malaysia especially to buy up large quantities of the fruit.

Durian is ‘extremely divisive’ with reports of murders The durian often invokes a love or hate relationship — some people have literally killed to get their hands on the fruit while it also had at least two typhoons named after it.

In 2016, a Malaysian durian seller was reportedly stabbed to death after an argument with a customer dissatisfied with the quality of his durians. Another durian-related murder case was reported by Malaysian local media in 2011, when a woman allegedly assaulted her brother-in-law with a piece of wood after a fight over a durian.

In Thailand, a wild elephant was so determined to get its trunk on a stash of durians it smashed down a store room wall and stole a horde of durians worth thousands of dollars.

In Australia last year, 500 people at Victoria University’s Melbourne campus were evacuated after someone left a rotting durian in a locker, and a similar incident occurred at a Melbourne Hospital in 2014.

Obama temporarily barred from Air Force One due to durian-breath

In 2014 April, Former US President Barack Obama, on-route to the Philippines after completing a 3-day visit to Malaysia, was denied entry into the presidential plane Air Force One by the Secret Service after his durian-tainted breath triggered the aircraft’s hazardous gas sensors. 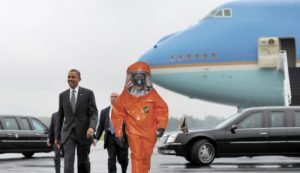 Mr. Obama, who had just enjoyed a large serving of the thorny fruit known for its pungent, strong smell yet delicious taste, was stopped by his own security personnel at the aircraft door and asked to return to his armored limousine and taken to a nearby airport VIP lounge where he could decontaminate his mouth.

A Secret Service spokeswoman said that this drastic measure was unusual, but needed to be taken for the safety of the entire plane, as the Asian fruit’s overwhelming smell, quoted by some as ‘reeking of garbage stink’, could overcome the other personnel and endanger the flight. We can’t have our pilots or other staff suffocating just because Mr. Obama says ‘Hi’ to them, unleashing the smell of hell unto them.

According to some other unverified sources, the order to quarantine the president came all the way from Washington DC — the First Lady herself. She was on video chat with him when he made the decision to make the durian pit stop. He didn’t tell her why he had to drop her call all of a sudden, but she saw his face, and she knew. She had seen it before when the First Couple visited an Asian store in Texas last year and chanced upon a pack of frozen durians. She made the call to the Secret Service with specific instructions to ‘not let POTUS in the plane until he gets rid of that wretched breath’.

In Malaysia — the second biggest durian producer after Thailand — farmers have started replacing palm oil plantations with durian in anticipation of the current ban on fresh imports from Malaysia to China being lifted when the countries finalize a deal later this year.

According to former Malaysian Agriculture Minister, Datuk Seri Ahmad Shabery Cheek, durians can yield nine times more than palm oil per hectare and there is huge opportunity for growth in China. Ms. Gasik said more people were investing in new durian orchards, but the fruit can be difficult to grow because it was susceptible to seasonal variations in yield and price.